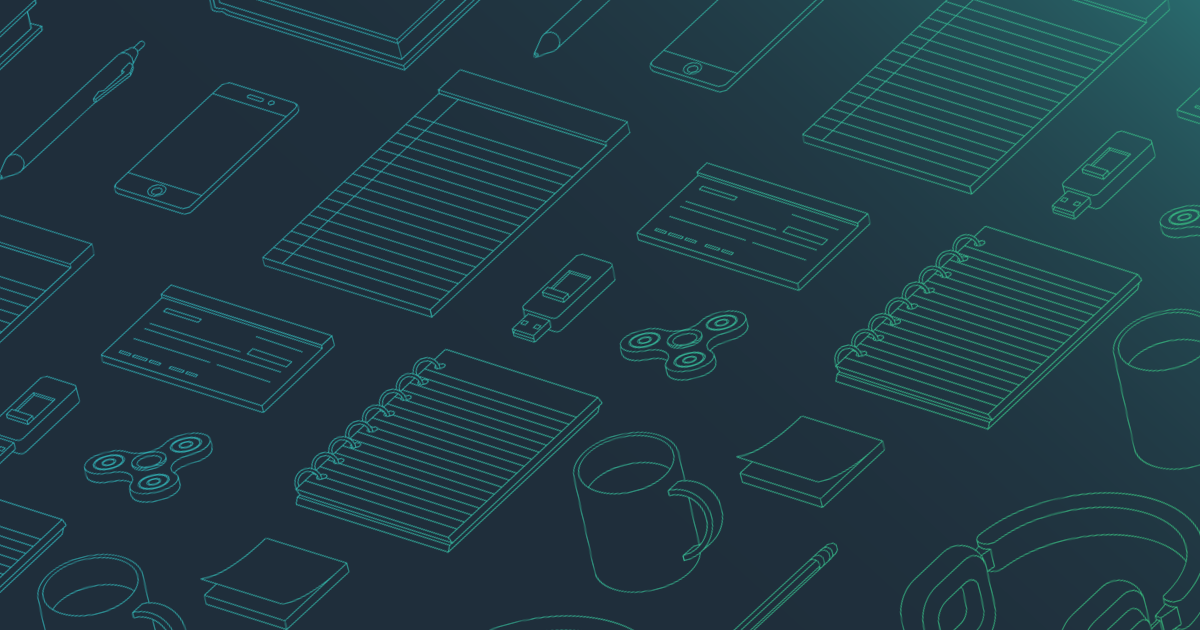 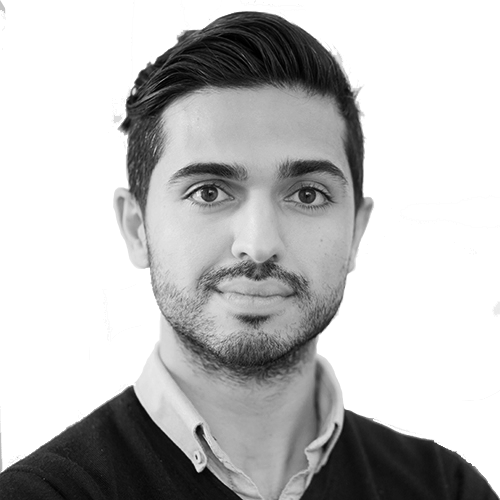 Today we're announcing the release of Gust's startup evaluation & feedback engine, which helps startup founders understand their fundraising potential and receive feedback about how to improve their venture's chances of raising money. This report is built on data collected during the tool's beta test.

In order to run and grow a high-growth startup, most founders eventually reach the point where they will have to raise funding from outside investors. This process can be long and grueling, feeling like a never ending cycle of approaching an investor, receiving feedback illustrating why the startup isn’t ready for investment, and then trying to act on the feedback before talking to the next investor.

To simplify and streamline this process, we built a startup evaluation & feedback engine for founders looking for investment. The engine compares data investors use to make funding decisions with Gust’s historical data on teams and investments collected from years of investment deals, 409a valuations, and accelerator acceptances. The tool then provides an estimation of investment potential with suggestions to improve the startup’s chances.

Trends in the startup landscape

So far, over 6,000 startups have used the tool to receive feedback on their businesses. Because these companies all initially joined Gust looking for funding, they are likely closer to the typical would-be unicorn startup than other types of small businesses. The data the companies provided show some interesting trends in the current startup landscape. This is what the businesses who used the engine looked like:

Investors use data about a team’s experience, education, and skills to ballpark a degree of confidence that a startup team will be successful. In addition and as an example, low founder commitment may be a sign of a risky investment or a green startup team may seem more likely to make rookie mistakes. To an investor, the safest investment generally has an encouraging mix of experience, education, and commitment. Most of the founders who used the engine demonstrated these qualities to some extent.

These founders all self-identified their business models as one of the following: Advertising, Pay-per-unit, Pay-per-project, Brokerage/Marketplace, or Recurring (i.e. subscription-based). The distribution of these was concentrated on revenue-generating models, with an emphasis on per-unit and subscription sales, but represented a broad set of approaches. 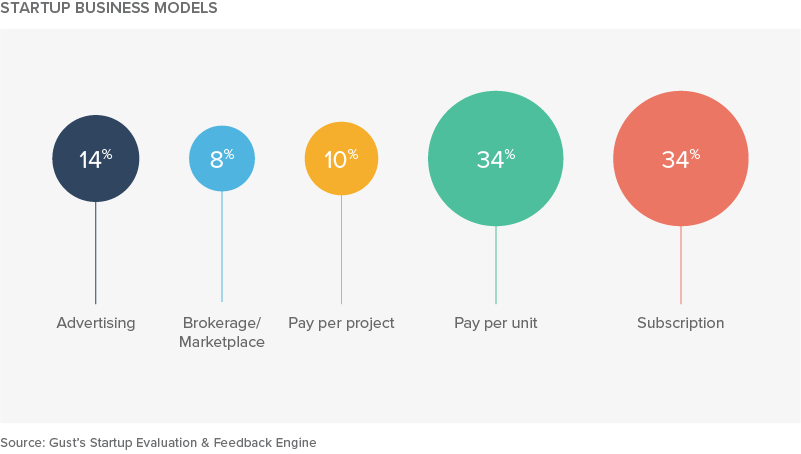 Because there’s no one-size-fits-all way to evaluate startup progress, investors look at different metrics for different business models (and market sizes). In each case, they’re looking for startup investments that demonstrate both progress and potential. Because progress and potential are measured differently by business model, Gust’s startup evaluation & feedback engine collects different data for each business type to better tailor the feedback to the insights an investor would offer.

Another key piece of information for investors is the confidence level both the team and their previous investors (like personal connections) have shown in the venture, viewed in the context of the funds the team has already raised. Investors are generally looking for answers to three questions: - Have you put in any of your own money? - Have you convinced anyone else to give you money? - What have you been able to do with the money you’ve collected so far?

By looking at the 6,000+ founding teams and their relative progress-to-date, we can start to see that investors’ traditional assumptions are generally correct. For example, a previous startup founder who has had success (defined here as a sale with at least a 1x return to investors) with one of their earlier ventures is a safer investment than a first-time founder. The data provided to Gust confirms this assumption if we look at revenue generated over the past 12 months among the most revenue-dependent startups (companies using the pay-per-unit, pay-per-project, and recurring business models) and compare that to the number of successful exits these startup founders have had previously. 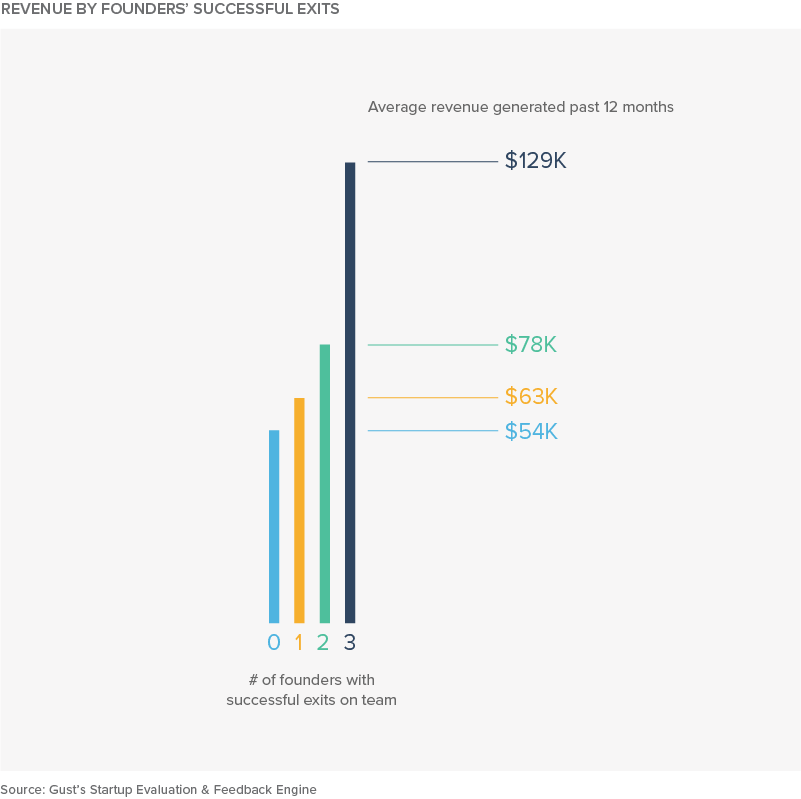 Founders who have had a previous successful exit are substantially more likely to generate revenue in their current venture, confirming investors' general investing assumptions

Not only are founders with previous successful exits more likely to raise money from professional investors, but we see that they tend to put more of their own money into their venture and are more likely to have raised money from friends and family. 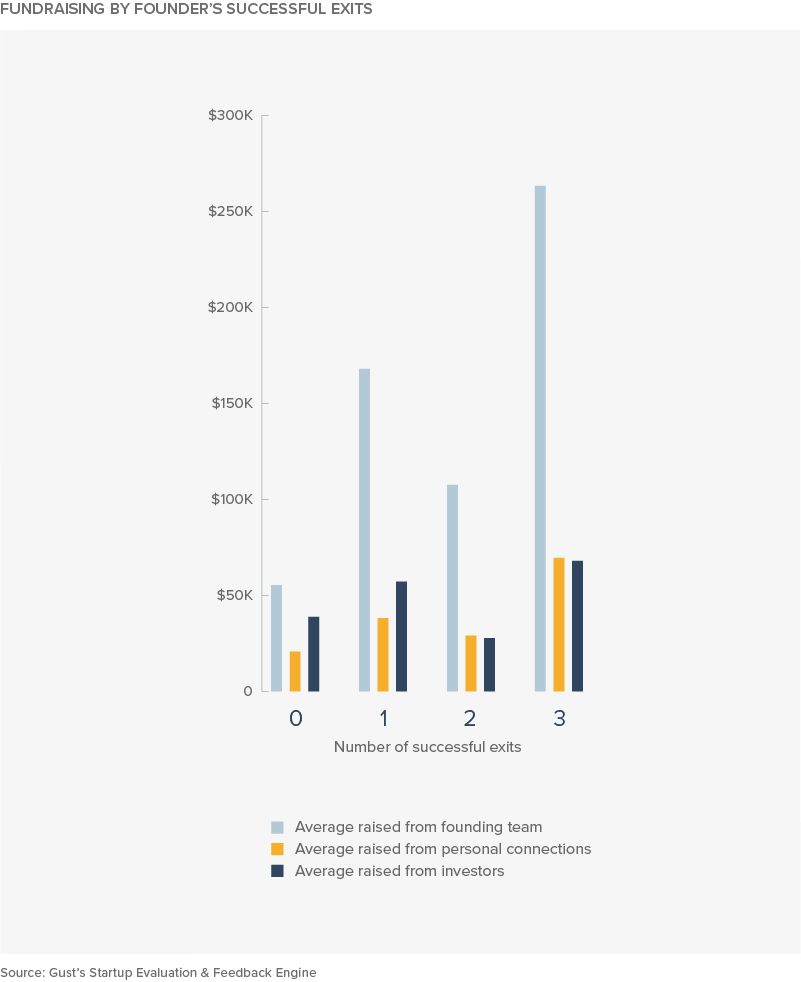 Similarly, startup teams with two or more co-founders are more likely to receive money from friends and family and professional investors as they are also seen as a safer investment. 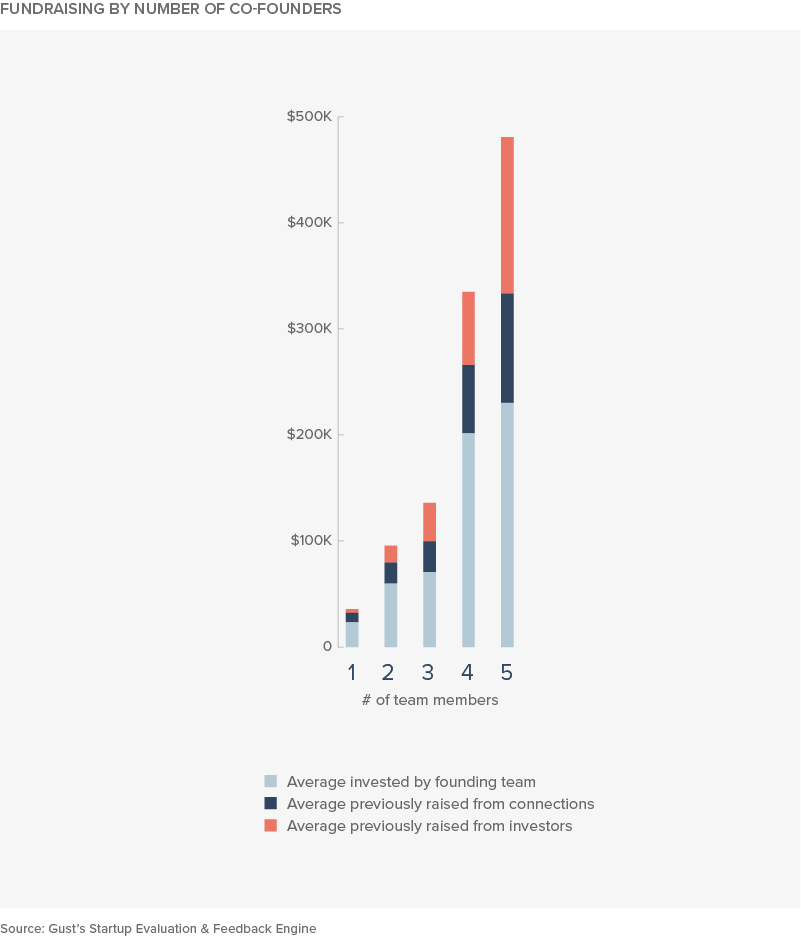 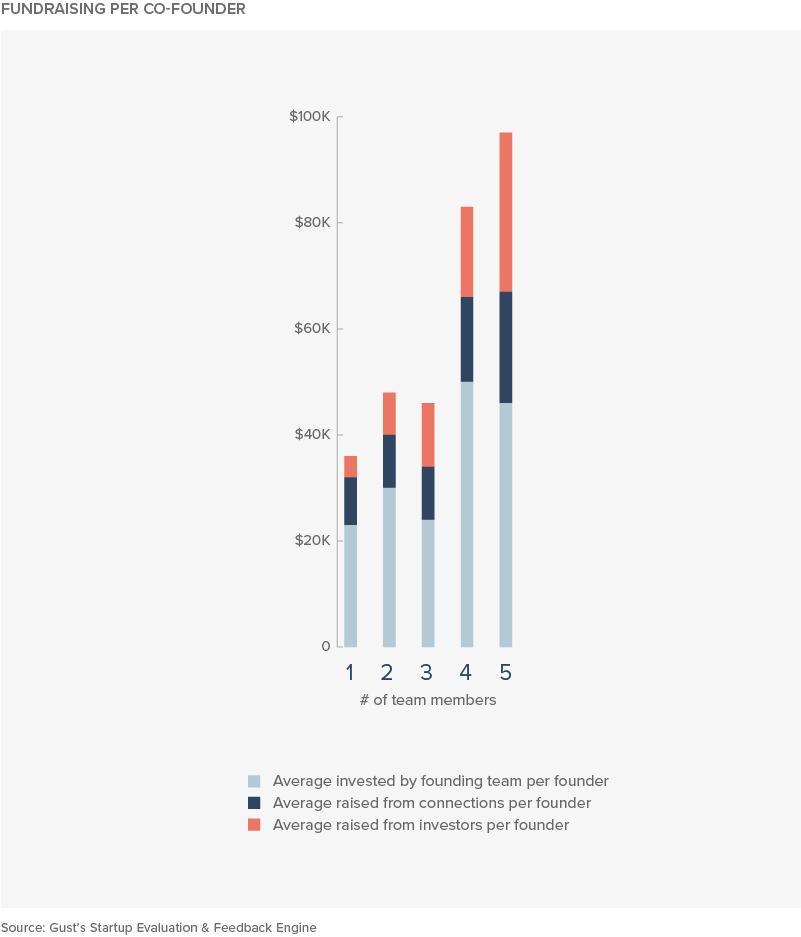 We also see that startups with more than one founder generally have more money invested by the founding team itself. While this correlation may seem obvious at the outset (more people on the team means more people available to put in their own money), the trend actually shows an increase in money invested per founder. In other words, larger teams seem to have a higher degree of confidence in themselves.

The arguably most interesting investment-readiness marker, due to its clear message, is the relationship between the presence of an MVP or prototype and the startup’s ability to raise money. 95% of the startups that made it past a friends and family round had something they could show off to investors. Investors tend to back businesses, not ideas, so it makes sense that the data reflects the difficulty of raising funds with only a pitch deck.

The data powering Gust’s startup evaluation & feedback engine comes from years of early-to-mid-stage startup investment deals, accelerator cohorts, and independent valuations cross-referenced with each founder’s input to identify the probable amount and source of their next raise.

The majority of the 6,000+ startups that have used the tool so far were in the Friends & Family stage (34%), Super Angel and Late-Stage Accelerator stage (26%), or Incubators & Early-Stage Accelerators and Small Angels stage (23%). 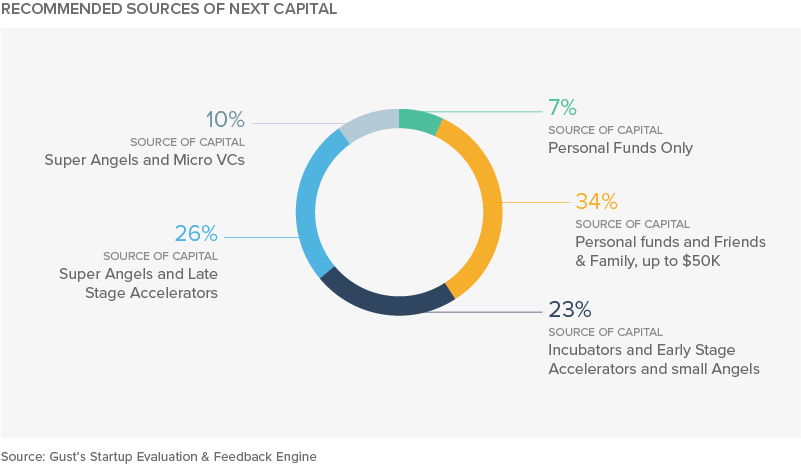 The recommended next source of capital for the 6,000+ founders who have gone through Gust’s startup evaluation and feedback engine to date.

The data shows some clear trends in previous sources of funding and dollars raised amongst founders in each stage. For example, companies that should look to Super Angels and Late-Stage Accelerators for their next round of financing had, on average, already raised $70,000 with 63% of that from personal investments and Friends & Family, 29% from other connections, and 5% from investors. Founders who put in more of their own money were also likely to fall into a higher fundraising stage. 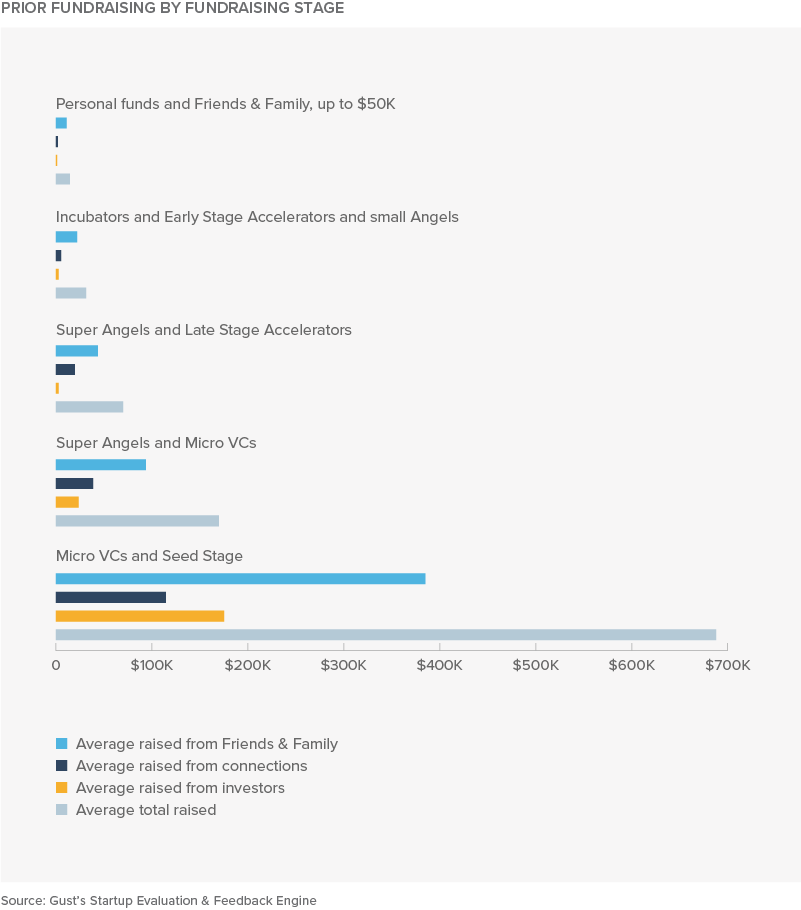 Total raised by startups in each fundraising stage so far, including some other sources not shown here.

Across the board, having raised more money is a strong predictor of how much a startup stands to raise today or in the future. Many startups are seeking investment because it’s highly correlated with their ability to address their market, so it makes sense that the ones who would be seen as the best investments are also the ones that other people have invested in—whether that money came from friends or angel investors, more money yesterday means more money tomorrow. 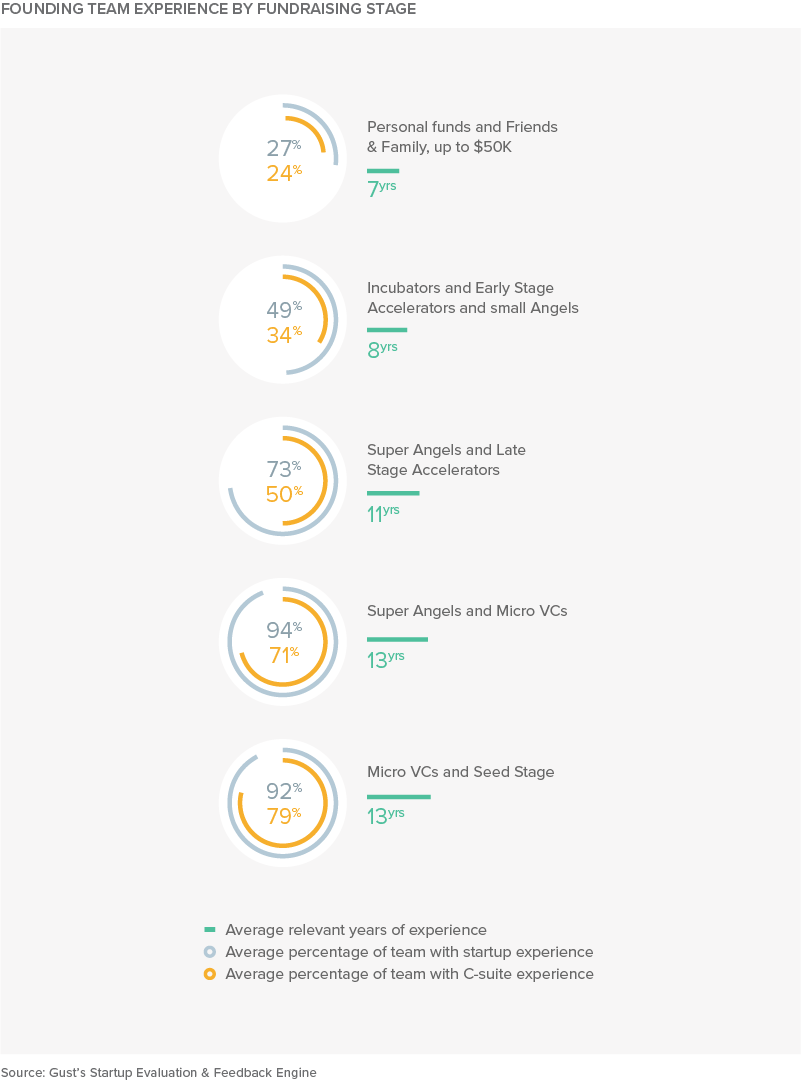 Traction is another strong predictor of which fundraising stage a startup falls into. When examining the 6,000+ startups and their recommended next source of capital by business model, further revenue and monthly average user trends emerge: 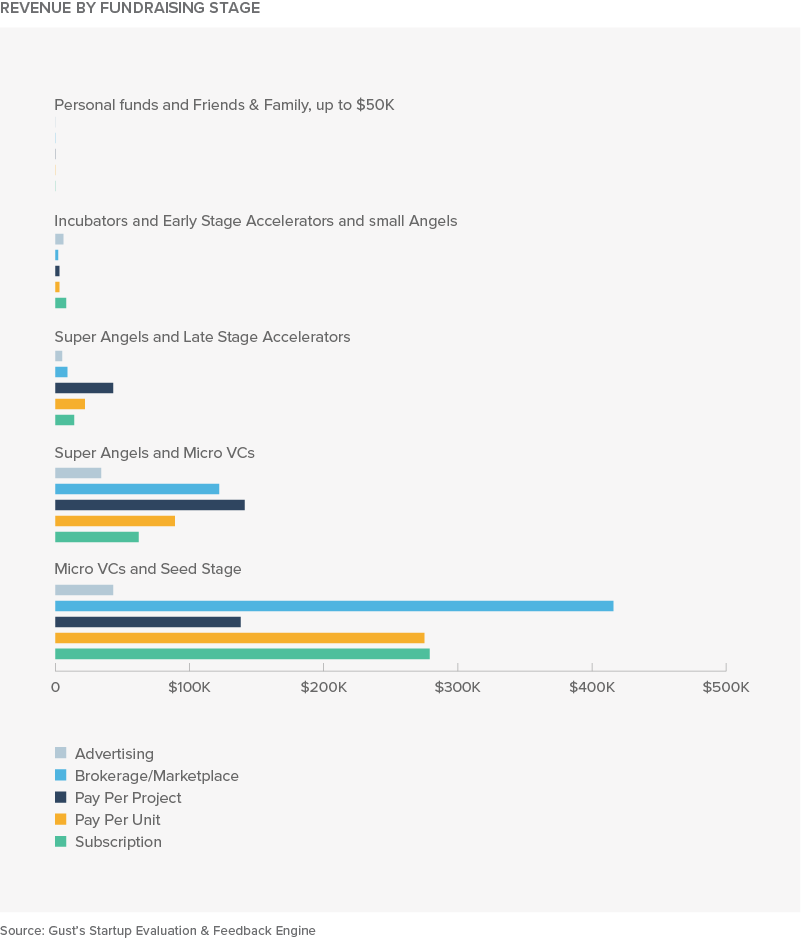 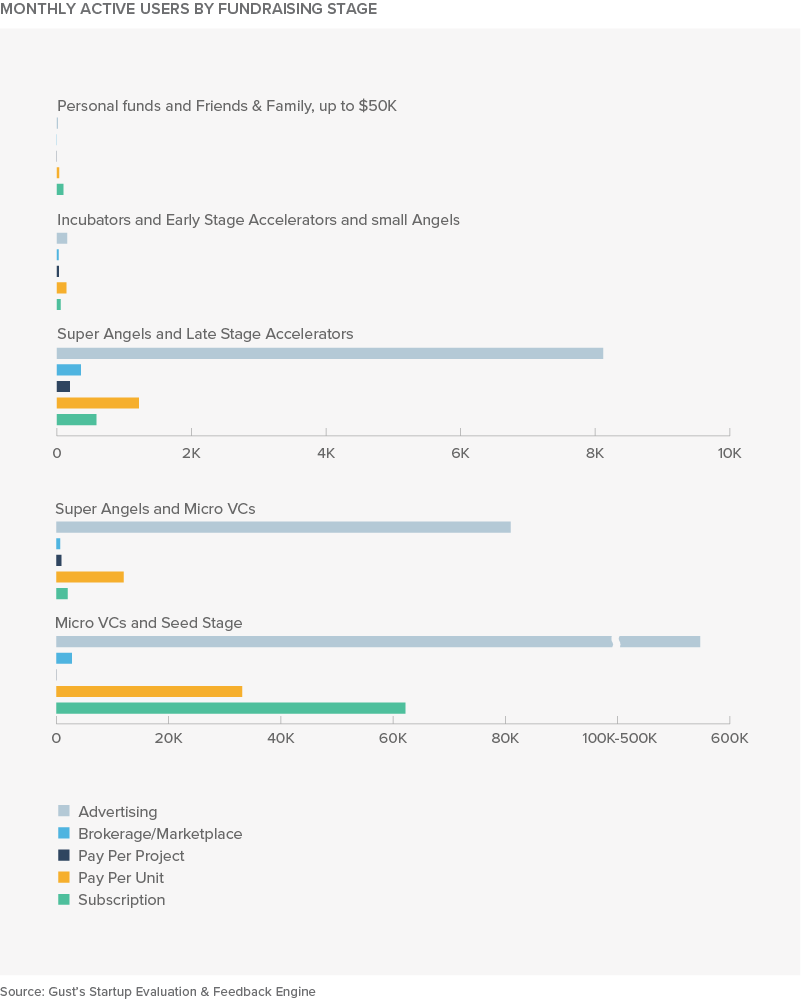 Whether the business model is user-based or has allowed the business to generate revenue, investors are more likely to invest in startups who have demonstrated progress in product-market fit.

Startups are born, seek investment, and fail every single day. While this means a broad range of variety in specifics, it also means that they are relatively comparable to a wide set of historical data that allows them to be put in context of the success or failure of previous startups. Then, a startup’s specific situation can be compared to similar businesses to identify what strengths and weaknesses they may have that mark them as a particularly safe or risky investment.

Any good investor applies their experience to appraising startups through their understanding of each business model, market, and team. In addition to looking at each of these factors by itself, the engine also considers their impact on each other—progress from a relatively weak team shows a venture’s strength, as would a great team with little to show so far. It turns out that, with enough data, investors’ insights are broadly replicable (for some kinds of business models). Gust’s startup evaluation & feedback engine uses the same information an investor would to evaluate and provide feedback on a business. Unfortunately for founders, it just doesn’t invest (yet).

Maximize your chances for fundraising success.